Looking to do a solo road trip through New England? 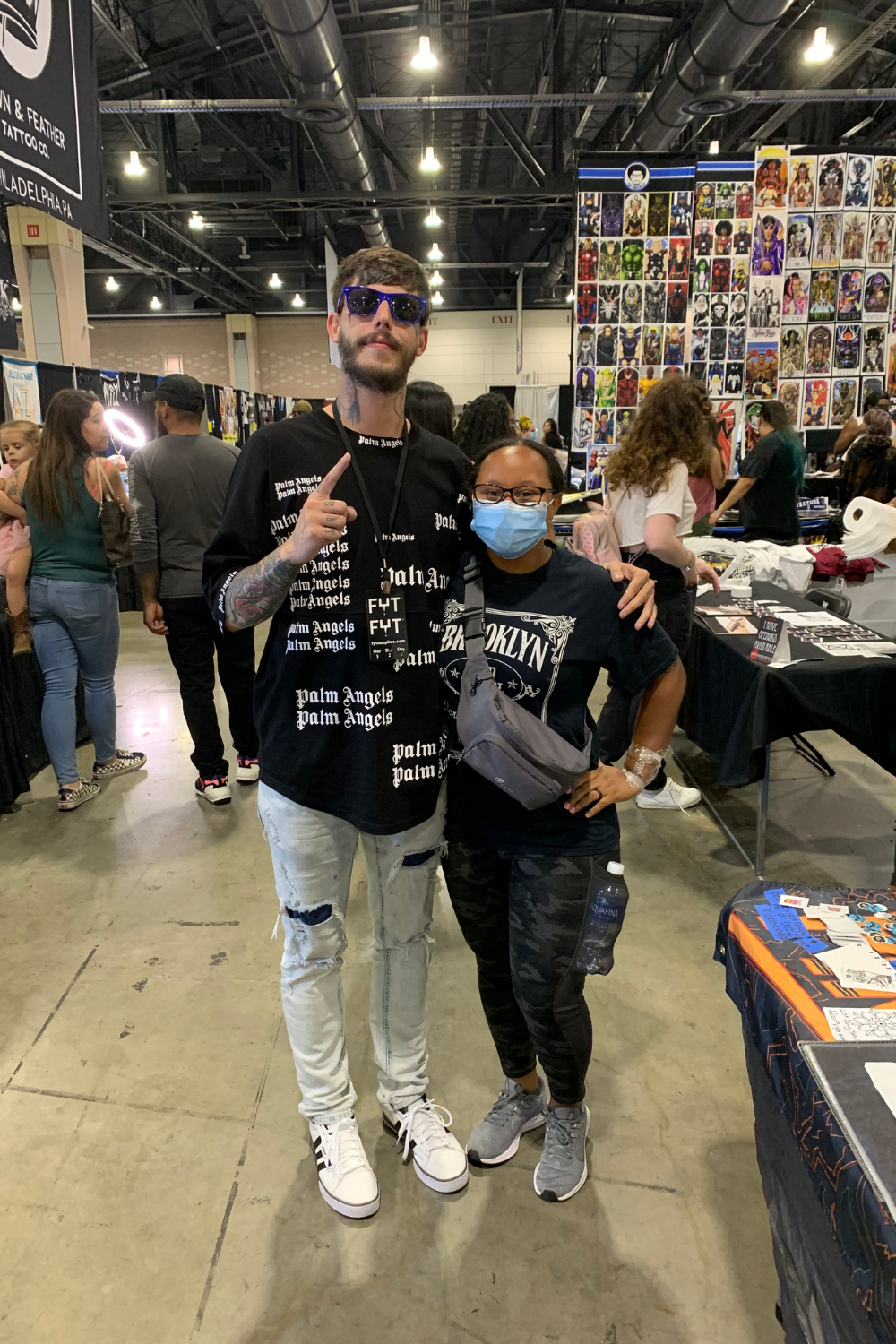 Villain Arts Tattoo Convention hosts multiple conventions in different cities throughout the year. From Friday to Sunday in February, they were going to be in Philly at the Philadelphia Convention Center. Day tickets are $25 and the 3-Day Pass is $50. My friend and I decided on a day pass and paid $25 to go on a Saturday.

This was going to be our first tattoo convention. We honestly didn’t know what to expect. We both exchanged our thoughts and opinions on what the convention would be like. Either way, we knew it’d be crowded and full of awesome tattoo artists.

Once we got up to the second floor of the center, we were a bit taken back at how crowded it was. We weren’t expecting to see as many people. I’m not sure why we thought that. We probably thought that because tattoos have such a stigma around them, not a lot of people would go to a tattoo convention. But alas, there were a ton of people there. From those who were curious to full on tattoo enthusiasts, everyone from all walks of life was there.

As we walked down each aisle, we knew we were in heaven!

Layout of the convention

The layout of the tattoo convention was pretty simple. There are multiple rows, each with numbered booths on both sides of the aisle throughout the floor. So, you can walk up one aisle, look to your left and right, and see different booths.

Each booth consists of tattoo artists from different shops from all over the country. You see not only different artists but their style(s) of tattooing. It was cool to walk up and down the aisles and see all the awesome and beautiful tattoo work. The best part, in my opinion, was recognizing tattoo artists you’ve probably seen on Ink Master or Inked Magazine, some place like that.

The fun part of the convention were the display tables. Each booth had either a book, board, or designs just laid out on the table. Potential customers could look through them and determine if they wanted a design. They also had stickers, digital artwork, or other items designed by the artist(s) which customers could buy as well. My friend and I looked at countless boards and books filled with amazing designs, and contemplated whether we should get one or not. The price for the design shown, so you know upfront what they’re asking for. The smaller tattoo designs were usually about $100 minimum and went up in price depending on style, size, and whether it was color or not.

Not all the booths held tattoo artists though, some booths had other items displayed like Saniderm (the stuff you put over a tattoo to help it heal). I saw a few that were selling T-Shirts, Anime, plushies, posters, and other items to purchase. Basically, there’s a decent mix of things at a tattoo convention that anyone can buy.

In addition, towards the back of the convention floor, there was a section where they held shows. There was a stage with chairs for the audience, so you could catch one of the shows that day. Of course, a convention wouldn’t be complete without food. Don’t worry, there were a few food stands for people to get food.

Should we do it?

After walking for a while throughout the convention center, we stumbled across this booth with some cute tattoo designs for those who wanted a tattoo. The tattoo company is called TyTats704 and they’re based in North Carolina. You can check them out on Instagram. The designs were small and cost about $100. My friend really saw this little design that she fell in love with but contemplated if she should get it tattooed.

I, on the other hand, saw a nice little design myself. I told myself prior to visiting the convention that I wouldn’t get anything as I was about to go to my tattoo artist to continue to work on my sleeve. However, when I saw this design, I couldn’t help myself. It was so cute and tiny, I thought it’d be cool to get but I was indecisive. My friend and I just went back and forth about whether we should be smart and save our money, or just go for it.

The lovely gentleman, the assistant I assume, with the tattoo artist was of no help because he kept insisting we get the tattoo. I guess he was just being a good sales person, because he was very persistent and chipper about getting us to go in.

In the end, my friend decided she wanted the tattoo and booked it with the artist. After thinking about it more, I decided I’d get a tattoo myself. I mean, we’re at a tattoo convention, might as well get tattooed!

I met a tattoo artist from TikTok!

Although we booked our time with the tattoo artist, we still had a few hours until our appointment. We decided to get some food and walk the remainder of the convention floor. While walking around, we passed by this booth and something about it looked familiar to me.

I looked at the art style and the tattoo artist until it clicked in my mind. I was looking at Jake Karamol, the tattoo artist from TikTok! Well, I was very happy and surprised to see him there. For a bit of context, back when I first created my TikTok account (this was my personal one), I found this artist and followed him. He makes skits about his experiences tattooing clients and the tattoo industry. Jake is a real tattoo artist with a shop in Maryland, called Timeless Body Arts.

I mustered up some courage to walk over to him, say hello, how much I loved his work, and skits on TikTok. He thanked me so much for saying that and showing support on his social media account, and how he loved meeting fans. I asked if I could take a picture with him and he said yes.

After the picture, he gave me a signed copy of a digital art piece he created. They were normally about $30 but he gave me one for free. He didn’t have to do that and I wasn’t expecting him to do that. Just my little picture was enough. Needless to say, he was super sweet, kind, and down to earth.

After meeting Jake and walking around some more, it was time for our tattoo appointment. What they do is text you about 30 minutes prior to your time slot to let you know the artist is almost finished with the current client and you should make your way to the booth. This ensures that, no matter where you are in the convention, you have time to walk back to the booth.

My friend was the first one up and then my appointment time was right after her. Her tattoo took about 45 minutes to an hour to do. Typically, the small tattoo designs don’t take that long because of the size and simplicity. If you went for a bigger design, it’d take a bit longer to do. But since our appointment times were at the end of the day, and the convention was closing soon, it didn’t take too long.

When my friend was done with her tattoo, it was my turn! I was super excited about this and about my little design. After the stencil was placed on me, the artist got straight to work. My design took about 45 minutes to an hour as well. It was a bit painful because it was closer to my wrist. That tends to be a bit more painful then, let’s say, your upper arm. But it wasn’t too bad and I sat through the whole thing. Once it was done, he wrapped it up and told me how to take care of it.

We both loved our new tattoos and were already talking about getting more. We even talked about going to another tattoo convention but only in another state. But there will be a separate blog post on that coming soon!

Overall, it was a fun experience and my friend and I enjoyed it. We’re both tattoo enthusiasts and this was something that genuinely interests us. It was also pretty cool meeting a tattoo artist from TikTok, how many people can say that?

The thing we both enjoyed seeing, was the different styles of tattoos and artist’s work. Tattooing is a very difficult craft to do and takes an artist years to learn. It was amazing just seeing how many talented artists there are who do a variety of different styles. From traditional to neo-traditional, realism, new school, black work, and everything in between, it was a great to see so many styles in one place.

If you’re into tattoos or if you’re just looking to see what they’re all about, try going to a tattoo convention. You don’t necessarily have to get tattooed there. But you can expose yourself to multiple tattoo artists, shops, and styles all at once while meeting other people.

Hey there, I’m JoJo! I love traveling and exploring different places around the world. I’m always looking for new areas to travel to. Not only do I love to travel, I love to write!
View All Posts
Follow Me :

Buy Me a Coffee!